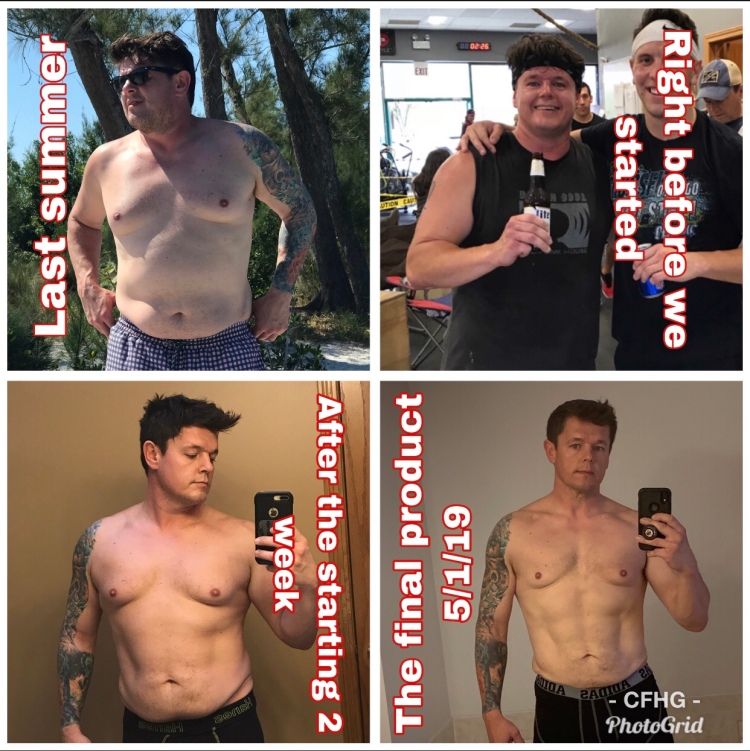 Story time. Four months ago Al came to me and said he was ready to change his life. I hear this a lot, so I did my usual “Awesome! It will be hard but stick to your goals and it will happen”. Al looked at me and said “No I’m serious, I want to go all in!” He asked me to take him on and work with him one on one and had told me he wanted to see his abs. People tend to think that to do it right is hard and turn towards the quick fix. When in reality all they need is consistency. People tend to give up because it does not happen fast enough. I told him he was going to have to do everything I said and just trust the process no matter what. Al looked me dead in the eye and said “bring it on”. Al’s process took a good 4 months of almost perfect consistency with his macro counting and hitting the extra programming that was personally programmed for him toward his goals.

Time to brag on Al. We all know I have high expectations and I push people hard because I want them to achieve what I know they are capable of doing. Al has taken every challenge I have thrown at him and worked hard and pushed himself out of his comfort zone. For that I have nothing but the utmost respect for him. I am big on mental strength and Al is probably one of the strongest. He took his goals serious and he asked me for help because he knew he couldn’t do it alone. He trusted what I was telling him, even if he didn’t think it would work, he still did it. The first two weeks I asked Al to stop drinking and to hit his maintenance macros perfect. The purpose is to see how many calories needed to be cut. This request is usually met with complaints or resistance. Al’s only response was “done”. I am aware this is not an easy thing to ask of people and that is why most people do not make it 2 weeks. He still went out on the weekends with his friends but he traded his beer in for water and still had fun. Al made it a game for himself, trying to hit the macros dead on. He made my job easy. After the two weeks we had his macros set. Al continued to hit them for four months and he ended up losing almost 40 pounds of fat. He was working so hard to achieve his goals that every night Al would send me his macros. Some nights he would be upset that he didn’t hit them perfect. When I say not perfect I am referring to 3 grams off. That’s perfect in my book! We all need to learn something from Al, be respectful and honest to ourself and our actual goals we want for ourselves and do whatever it takes to achieve them. Al, you’re the man! You definitely got those abs you wanted.